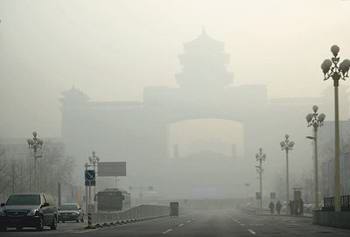 The air quality in Beijing has been exceeding the standard for five consecutive days, and other areas have continued to suffer haze and haze. The Ministry of Environmental Protection issued an emergency circular on the 14th to require all localities to continue to strengthen the total amount of sulfur dioxide and nitrogen oxides in thermal power, steel, cement, and other industries, and focus on industrial smoke dust, construction dust, volatile organic compounds, and vehicle exhaust pollution control. jobs.

On the same day, the Asian Development Bank and Tsinghua University released a report of the "National Environmental Analysis of the People's Republic of China" that only less than 1% of the 500 large cities in China have reached the World Health Organization's air quality standards. A number of experts interviewed by the "Economic Information Daily" reporter said that to cope with excessive PM 2.5, measures should be taken as soon as possible in the industrial structure, energy structure, urban planning, etc.

The reporter learned that on the 14th, the Beijing Municipal Bureau of Meteorology continued to issue the highest-level orange warning. Beijing still maintains the visibility of less than 2000 meters. According to data from the Beijing Environment Monitoring Center, as of 10:00 pm on the 14th, the hourly concentration of particulates with a diameter of less than 2.5 microns in the urban and southern regions (abbreviated as PM 2.5) is still above 250 micrograms per cubic meter, far exceeding the 2012 enactment and implementation in 2016. The Ambient Air Quality Standard specifies 35 mg (one day) and 75 mg (second day) per cubic meter.

From Beijing to Tianjin, from Hebei to Shandong, and from Henan to Guangxi, China's large-scale haze weather is affecting people's lives. According to the report of Xinhua News Agency, on the Beijing-Hong Kong-Macao Highway between Changsha and Xiangtan, there were more than 40 traffic accidents in the 9 hours from 8 am to 5 pm on the 13th; Beijing, Jinan, Shijiazhuang and Nanning cities In large hospitals, the number of admissions to the Department of Respiratory Medicine, Allergy Testing, etc. soared 7 to 8 times in just a few days.

Not only the local multi-pronged approach, but the Ministry of Environmental Protection also disclosed on the evening of the 14th. In an emergency notice that day, all localities were required to focus on the prevention and control of fine particulate matter and effectively carry out air pollution prevention and control work. To continue strengthening the control of sulfur dioxide and nitrogen oxides in thermal power, iron and steel, and cement industries, we must focus on the control of industrial smoke dust, construction dust, volatile organic compounds, and vehicle exhaust pollution, and establish the strictest regulations in key areas. The special emission limit system for air pollutant discharge standards and the multiple replacement system for pollutants in new construction projects. Key regions such as the Beijing-Tianjin-Hebei region, the Yangtze River Delta, and the Pearl River Delta should establish and improve joint prevention and control mechanisms for regional air pollution prevention and control to further enhance the overall regional pollution control force.

The Ministry of Environmental Protection admits that according to the results of air quality monitoring and weather forecast analysis, currently the haze weather in the central and eastern regions of North China, Huanghuai, Jianghuai, and Jiangnan continues to persist, and many areas are seriously polluted, producing and living for the people. Physical health has an adverse effect. The Ministry of Environmental Protection stated that it is necessary to implement emergency plans under heavy pollution weather conditions. According to the pollution level, a response mechanism should be established to initiate the emergency plan in a timely manner. Encourage enterprises and institutions and the public to take part in actions to reduce the discharge of pollutants and effectively reduce the adverse effects of pollution on the health of the people.

On the same day, at the North Fourth Ring Road in Beijing, where atmospheric visibility was low, a multinational seminar sponsored by the Asian Development Bank, Tsinghua University and other officials and experts from the National Development and Reform Commission, the Ministry of Environmental Protection, and the Ministry of Finance focused on the Chinese environment. problem. The Chinese version report of the National Environmental Analysis of the People's Republic of China, â€œTowards an Environmentally Sustainable Futureâ€ published at the seminar, states that although the Chinese government has been actively using fiscal and administrative measures to control air pollution, the worldâ€™s pollution Of the 10 most serious cities, 7 are still located in China.

â€œThe environmental challenges facing China can be said to be more complex than any other country,â€ said Hamid Sharif, Chief Representative of the Asian Development Bank in China. â€œAlthough the Chinese environment has improved in many ways, However, due to the increasing pressure on the environment, the overall situation is still deteriorating. There are still many things to do before the environmental situation in China reaches a turning point."

Li Xinmin, former inspector of the Department of Pollution Prevention and Control of the Ministry of Environmental Protection, told the â€œEconomic Information Dailyâ€ reporter on the 14th that the annual emission of sulfur dioxide was controlled within 12 million tons to meet the â€œthree-dayâ€ requirement for outdoor activities; "At the end of the tenth year of the "10th Five-Year Plan," after the emission of sulfur dioxide exceeded 10%, the annual amount of sulfur dioxide emissions still reached more than 22 million tons, which is still far exceeding 12 million tons. "As with the sulfur dioxide, other pollutants exceed the environmental carrying capacity. At the same level, it is still unable to meet the comfort and health needs of the people in the short term."

â€œAir pollution involves various aspects such as industrial structure, energy structure, and urban planning, and temporary emergency measures taken against 'heavy-pollution' weather in the short term will not help.â€ Hao Jiming, Dean of the Institute of Environmental Science and Engineering, Tsinghua University and Academician of the Chinese Academy of Engineering Say. Li Xinmin said that in the past decade, the coal-based energy structure has not been significantly improved.

According to a report issued by the Asian Development Bank, all the above pollutants come from industrial point source emissions and motor vehicle exhaust emissions. On the one hand, most of the sulfur dioxide emissions come from thermal power plants and non-metallic mineral production, steelmaking, chemical manufacturing, and nonferrous metal smelting companies. These industries account for more than 85% of total SO2 emissions, which is much higher than their contribution to the total industrial output value. On the other hand, due to various pollutants such as PM 2.5, motor vehicle exhaust gas can cause severe air pollution. In the past few years, the number of civilian motor vehicles (ie, non-military vehicles, official vehicles, and private cars) has grown at a rate of 15% annually, and the annual growth rate of private cars has reached 20%.

Specifically to PM 2.5, Xia Guang, director of the Environmental and Economic Policy Research Center of the Ministry of Environmental Protection, told reporters that severe over-standard PM 2.5 in large-scale cities is related to the following factors: First, vegetation destruction up to a few hundred kilometers away, and a large number of exposed topsoil Increased, long-distance transportation of dust to the city; second, urban-rural integration followed the center of the city after major construction projects, taking Beijing as an example, dust outside the five-six ring is flying high; third, industrial production and daily life of pollutant emissions, including coal-fired boilers, Motor vehicle exhaust, cooking fumes, gas stations and home renovation of volatiles, etc.; Fourth, the surrounding urban heavy chemical industry emissions, such as the surrounding city of Beijing PM 2.5 emissions contribution rate of nearly a quarter.

â€œWith such a high intensity of human activity, so many environmental history owed, you will encounter such 'breaking weather' in the coming year. If you come out of 'mix', sooner or later you have to return it.â€ Xia Guang believes, To build a cosmopolitan city that is pleasant, livable, suitable for travel, and suitable for business, the city's layout, industrial structure, and management level must be comprehensively adjusted. This adjustment process is the process of building an ecological civilization.

The above report from the Asian Development Bank shows that, in general, air pollution in big cities is much more serious than in small and medium-sized cities. The city with the most serious air pollution in China is between 1 million and 2 million. In addition, in some parts of China, pollutants interact with each other, and they are superimposed with pollution from nearby cities and industrial areas to form areas with severe air pollution. Therefore, as the frequency of smoke, haze, and acid rain increases, the environmental quality of these areas is generally declining.

Hao Jiming pointed out that in the past few days, other atmospheric pollutants besides PM 2.5 are also excessive. PM 2.5 is a secondary generation of other atmospheric pollutants such as sulfur dioxide, nitrogen oxides, and volatile organic compounds through complex physical and chemical reactions. However, due to the fact that PM 2.5 is getting hotter, in fact, "only treating PM 2.5 is a temporary solution."

In addition to developed regions, a Chinese official who spoke and spoke at the meeting estimated that the current level of urbanization in the western region is 10 percentage points lower than that in the eastern region; in the next five to ten years, the urbanization rate in the western region is expected to catch up with the eastern region. When talking about how to avoid repeating the mistakes of air pollution in the eastern region, the official said that he does not advocate the construction of mega cities such as Beijing and Shanghai in the western region. He suggested that it is necessary to develop the "Guanzhong-Tianshui," "Chengdu," and "Beibu Gulf," three major urban agglomerations, build a number of small cities around large cities, and embellish small towns around them, which will help break through the rapid development of urbanization. Population, resources and environmental bottlenecks in the process.

Li Xinmin suggested that as soon as possible at the top-level design level, air pollution should be the â€œwholesale strategyâ€. On the one hand, with the continuous improvement of the urbanization rate in the next ten years, the level of environmental infrastructure construction and the control of pollutant emission sources must keep pace with urbanization. On the other hand, the environmental protection department cannot only be a â€œfire brigadeâ€ for ecological restoration and accident disposal, nor can it be a â€œgoalkeeperâ€ who is struggling to keep up with environmental risks. Environmental protection must be fully involved in project approval, development planning, and economic policy. China runs through the entire process of economic and social development, which not only saves financial funds, but also builds a "beautiful China."